Swiss citizens went on a real spending spree last Friday and Monday. The record of parcels sent in the previous year was not only beaten – it was literally smashed, rising by 15 percent. During Black Friday and Cyber Monday, Swiss Post delivered more than 5,9 million parcels in one week. 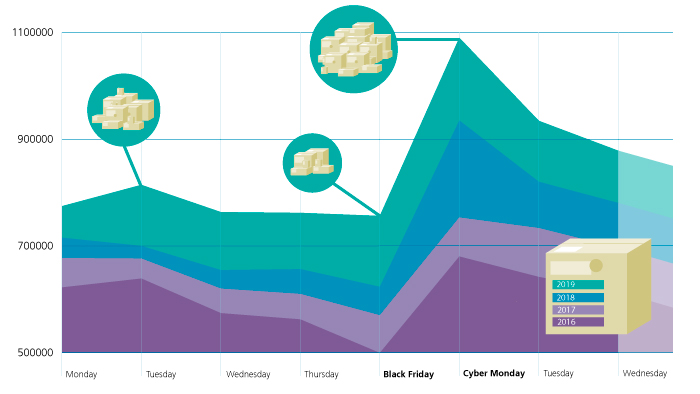 Since Black Friday, the conveyor belts for Zamam Gholami and Nasi Nayazai in the Härkingen parcel center haven’t stood still at all. They have been working tirelessly, emptying the delivered containers which are packed to the brim with parcels from thousands of retailers. “I’m glad that Nasi supports me. On normal days I can do it alone – but now both of us are needed and we are giving it everything we’ve got,” Gholami is pleased to say.

The stormy wave of shopping due to Black Friday and Cyber Monday has subsided temporarily but things are no less blustery at Swiss Post’s parcel centers. This is reflected in an increase of 15 percent more parcels and new record numbers throughout Switzerland.

Everybody lends a hand
Ruedi Egger is also eager to get down to business and distributes the goods on the parcel chute into the trailers provided. He has been working at the Härkingen parcel center for 11 years, and given the wealth of experience he has, everything works like clockwork for him. “I like it when the fully loaded bands rattle. A break in between is good – but now I have to keep going,” he says, and is already on his way to the next crammed parcel chute. The Black Friday and Cyber Week sales events herald the start of the pre-Christmas season in the retail sector. Swiss Post’s conveyor belts hardly get a chance to rest until early January, and every pair of hands is needed. To ensure goods purchased in stores or online arrive on time at the customers, Swiss Post deploys around a third more staff in parcel logistics. Staff planning takes place well in advance. 800 000 parcels a day
But it is not just our parcel centers that are running smoothly; the same applies to our mail and parcel carriers. They give their all to ensure the goods people purchase arrive on time despite record numbers and order books bursting at the seams. Instead of the approximately half a million parcels sent on a normal working day, Swiss Post delivers an average of more than 800 000 parcels during the sales week. In the days immediately after Black Friday and Cyber Monday, there were even as many as 1 million parcels. These are impressive figures that show what our staff are capable of during this time and how flexible Swiss Post needs to be to hold its own in the fiercely contested parcel market.

ecord numbers such as experienced on Black Friday as well as parcels numbers increasing at up to seven percent require major investments in a market with heavy price pressure caused by intense competition. And as Swiss Post understands how demanding this work is and what its employees are capable of achieving, it wants to ensure that together with its social partners, fair wages are paid in its parcel logistics. Swiss Post is currently investing around CHF 190 million in new parcel distribution centers. The recently opened center in Cadenazzo (TI) helped break the Black Friday peak levels experienced by the Härkingen parcel center. But even still, Swiss Post employees had their hands full sending the mountain of parcels to the right channels and delivering them to the recipients.