Recently voted “World’s best postal service”, now commended for outstanding corporate quality: with the EFQM Global Excellence Silver Award, Swiss Post has entered the top-flight league of organizational development thanks to the PostMail unit, and is now on a par with well-known international companies. 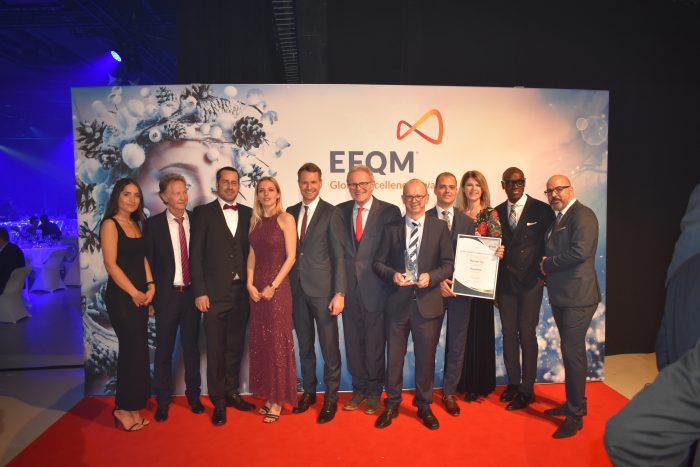 Do you demand the highest standards of your own services? For Swiss Post, this is a matter of course. Last year, PostMail delivered 97.4 percent of A Mail letters and 98.9 percent of B Mail letters on time. These are record levels which exceed the specifications set by the Swiss Confederation and are to the clear benefit of its customers. Results like this are possible in Swiss Post’s letter unit if:

There’s now little doubt: PostMail is also outstanding when compared globally with other sectors. On the evening of Wednesday 23 October 2019, the letter unit came second in the EFQM Global Excellence Silver Award in Helsinki – the world’s leading prize for corporate excellence, missing out on first prize by only a hair’s breadth. “We’re immensely proud” says Project Manager Marco Schöpf, an expert in business excellence. “The prize puts us on a par with companies like BMW and Bosch.”

On the right path
Ueli Hurni, Head of PostMail and Member of Executive Management is also very satisfied: “We’re extremely pleased with this prestigious international award. For me, it’s not just a confirmation that we are on the right path with our corporate leadership. It’s also major praise for our employees who are shaping, carrying forward and living out the changes every day thanks to their skills and ideas. On top of that, it provides impetus to master the challenges of the future.”

A huge amount of effort
PostMail has been aligning itself to the EFQM model for more than a decade (see the info box). The decision to participate in the global competition was taken around two years ago. In May of this year, nine assessors from across Europe put the company unit and its 15,000 or so employees to the test. Around 50 interviews took place to survey over 200 employees, locations were inspected and processes were screened on site from A to Z. “A huge amount of effort”, says Project Manager Marco Schöpf. But it was all worth it. Ueli Hurni also considers the prize as a confirmation of the interplay within the entire company. “It’s an award that radiates across the entire Swiss Post organization.”

Plenty of lessons learned
What’s clear is that a prize like this is not only a confirmation but also an obligation on those who want to guarantee this confirmed quality in future in keeping with the phrase: “Those who stop trying to improve stop being good”. Project Manager Marco Schöpf is very confident in this regard: “Plenty of lessons have been learned by the organization as part of the EFQM application process”, he says. And Ueli Hurni adds that both customers and Swiss Post benefit from the efforts undertaken by PostMail to continually and sustainably improve processes and systems. “Volumes have been declining for many years. But we’ve still been able to achieve the highest profit contribution for the corporation without increasing letter prices since 2004”, says Hurni.

EFQM and excellence explained in brief