Swiss Post robots taking the lift in the hospital

Turning heads everywhere they go: Swiss Post robots have been reducing the workload on staff in Lugano hospital since September. They’re true all-rounders and can transport practically everything be it medication or other goods – completely independently and around the clock. The goods they carry are protected by a pin code – meaning they arrive safely with the intended recipients. The robots in Lugano can even use the lift independently.

The first Swiss Post indoor robot was put into operation in Ospedale Civico in Lugano in September 2020. It transports medicines from the hospital’s pharmacy on the ground floor to every department, while independently navigating the building’s 18 floors. It can now also take the lift. This is a first for the Swiss Post robots and offers a major advantage: it guarantees that medication is conveyed as quickly as possible directly to the place it’s needed. Thanks to PIN code protection, the goods arrive securely with the intended person.

In October, a second Swiss Post robot entered into service in Ospedale Civico: a robot that can transport trolleys and every possible type of heavy load. The robot currently transports large consignments of medications but in the future, it could also include trolleys holding waste, laundry or food. This second robot is also a real powerhouse: it can easily carry up to 700 kg of material. 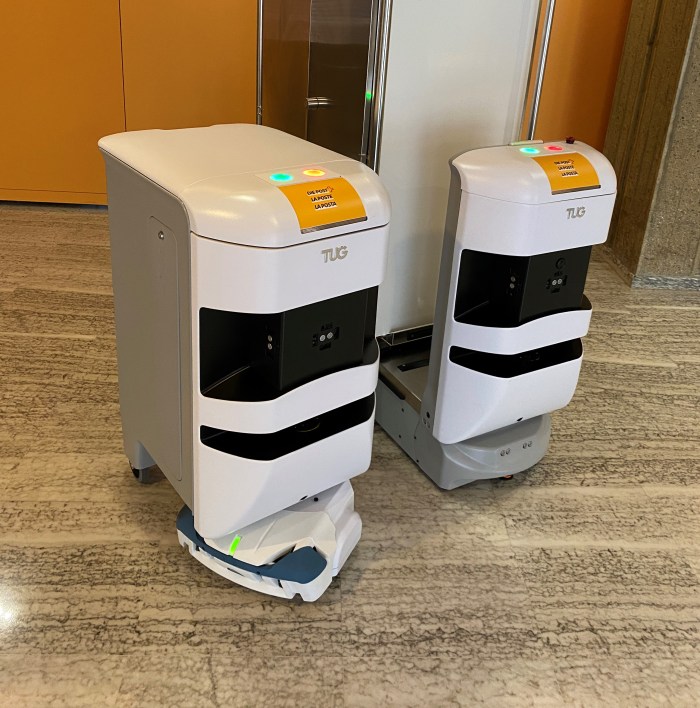 These versatile robots also impress Luca Jelmoni, Director of Ospedale Civico: “The robots are part of various innovative projects in our hospital.” These include Swiss Post drones, which have been flying blood samples on order of the director since 2017. “It’s always important that innovations lessen the workload of our employees and enable enhanced service provision for our patients”, says Jelmoni. That’s the most important factor. Paola Rinaldi who works with the robots everyday can confirm this: “We’re very happy with how the first weeks with the robots went. They relieve the strain on us employees – long trips from floor to floor can be avoided and we can concentrate on our core duties.”

And this is how it looks when the robot gets into the lift.

The first Swiss Post indoor robot was put into operation in Ospedale Civico in Lugano in September 2020.

One obvious question is how the robots actually find their way: the transport robots navigate by 2D mapping. Once they’ve covered a route, the robots developed by the US firm Aethon can take the trip autonomously. Sensors enable them to pinpoint their location with centimetre precision. If these autonomous vehicles come across a situation they can’t resolve themselves, they stop automatically. The sensors allow them to spot obstacles from far away, wait for people to pass, or avoid other obstructions. The delivery vehicles also feature various safety components enabling them to sense the environment and distances. WiFi lets the robots communicate with lifts and doors, giving them the ability to access different departments or call the lift. Transponders on doors react once the robots approach and the doors open automatically. They feature in-built lift controls coupled with the lift manufacturer’s mechanism to open the doors once a robot approaches, and allow it to move not only from room to room but also from floor to floor.

The robot in Nyon.

The Ospedale Civico in Lugano is the second Swiss hospital to use an autonomous Swiss Post robot. An indoor Swiss Post robot has been assisting staff in the laboratory at Nyon hospital since last year – and to great success. Since its deployment, the robot in Nyon has already carried out 2,787 deliveries and covered an impressive 860 kilometres. In the USA, 160 hospitals have been using the tried-and-tested, market-ready indoor robots for 10 years already. Increasing digitization and cost pressure in the healthcare sector, particularly in hospitals, means there is a need for new and efficient logistics solutions. The strengths of autonomous delivery vehicles in logistics, especially in healthcare, can offer a new solution. They’re efficient, can lower the workload on employees, such as in Lugano or Nyon, and last but not least, are available around the clock.