Swiss Post has been taking to the ice since 1961

Hotshot players storming forward together across the ice: the latest ice hockey stamps are by no means the first to commemorate this theme. The first hockey motif came out 59 years ago and Swiss Post has been taking to the ice ever since. Here’s a quick rundown of the six ice hockey stamps and the history behind them.

Ice hockey on Swiss Post stamps? PTT, as Swiss Post used to be known, launched a stamp back in 1961 featuring a hockey motif. More were to follow. The reasons behind the creation of these stamps were the World Championship in Switzerland, the Olympic Games, an anniversary and the exploits of the Swiss hotshots. Striking: the motifs have changed in a big way over the years. So what better reason to take a look back and celebrate them? We hear from experts and their various takes on the series. Expert 1: Janos Kick, media representative of the 2020 World Championship and major ice hockey aficionado. Expert 2: Bernhard Kallen, Head of Product Management for Stamps & Philately at Swiss Post. 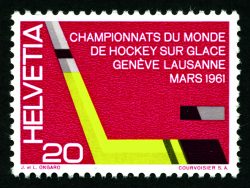 The occasion for the first ice hockey stamp was the World Championship held in Geneva and Lausanne in 1961. It came during the Cold War and a dispute over flags meant West Germany did not compete against East Germany in the group games and lost by forfeit. A scandal. Canada won the gold medal and Switzerland climbed into to the top tier.
Janos Kick: “What a motif! It reminds me of the 2D animated ice hockey games on Nintendo’s first games consoles.”
Bernhard Kallen: “Typical typography for this period. Very minimalist and clear, striking, powerful colours, sans serif font. And designed and printed by Courvoisier – then the best printer of stamps in the world.” 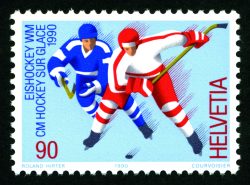 In the style of tabletop hockey: the special stamp from 1990. | Motif by Roland Hirter.

1990, the Group A World Championship in Berne and Fribourg without second-tier Switzerland was the reason behind the second ice hockey stamp. The Iron Curtain had fallen, the “sbornaja” headed by the legendary coach Wiktor Tichonow become world champions yet again. But the event also saw the curtain come down on the USSR team.
Kick: «“The motif is reminiscent of political posters and graphics from the socialist countries of this period. So it was quite fitting that the Soviet Union won the title in their final tournament.”
Kallen: “Typical of the 1990s. Speed is the defining topic of this period. Everything is in motion. It had to be dynamic, not static – which this subject matter illustrates beautifully.” 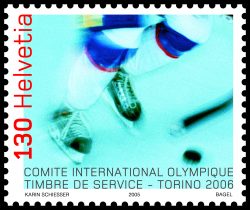 Printed exclusively for the International Olympic Committee: the official stamp could only be used by the IOC. | Motif by Karin Fanger Schiesser.

At the ice hockey tournament during the 2006 Olympic Games in Turin, the Swiss were favourites and beat the Czech Republic as well as title contenders, Canada. But it all came to an end in the quarter final. Another ice hockey stamp had been released beforehand to ease the wait for the Olympic tournament.
Kick: «“An unforgettable tournament for the Swiss, like a hockey fairy tale. Unfortunately, Sweden, who later went on to win, were a fly in the ointment – and it wouldn’t be the last time.”
Kallen: “Friendly, intentionally unfocussed and blurred, the motif doesn’t pop as such. The way the typography and design are combined is noteworthy – they blend over the edge of the picture.” 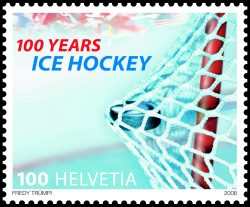 How fast must this shot have been? Special stamp to mark 100 years of SWISS ICE HOCKEY | Motif by Fredy Trümpi.

A classic commemorative stamp: SWISS ICE HOCKEY celebrated its 100-year anniversary in 2008, fuelling anticipation for the World Championship held in Switzerland the following year.
Kick: “100 years of sporting fair play, exciting duels and many goals: beautifully outlined in design. The bad news that the Swedish flag made it into the motif is painful to my hockey-loving soul.”
Kallen: “Realistically illustrated, clear and yet hazy. It’s great how the flags underline the internationalism of the event.” 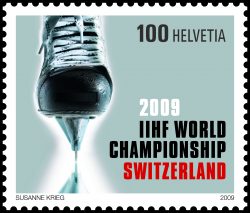 A reflection in the ice: the special stamp for the 2009 Ice Hockey World Championship. | Motif by Susanne Krieg.

There has not been a World Championship on Swiss soil that has not been commemorated; 2009 was no exception. But Switzerland fell short of its sporting expectations. Despite a lively atmosphere in Berne and Kloten, the national team bowed out in the preliminary round. Russia became world champion.
Kick: “Is it the grey colour? It seems somewhat sad to me and incomplete, with just one ice skate. It’s quite fitting for Switzerland’s premature departure. The national team truly suffered from a “home disadvantage” at this championship.
Kallen: “Very striking and reduced to one element, interpreted in a photo-realistic way. The ice plays a key role in the way it reflects. And the font reminds me of the text on old transport crates. 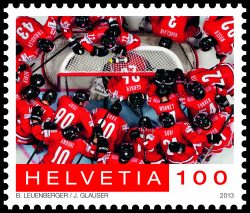 Nobody expected this stamp. But at the 2013 championship in Sweden, Switzerland did better than ever and at times had their opponents cornered. But the Swiss lost the final – who did they lose to again? A silver medal was still sensational though.
Kick: “I still have goosebumps today. The beginning of a new era for Switzerland: we didn’t just hold our own against the great teams, we managed to win, too. Do I really need to say anything more about Sweden?”
Kallen: “This motif was virtually plucked out of thin air. Everything needed to happen very quickly, the phones were ringing off the hook between Swiss Post and SWISS ICE HOCKEY. They were looking for a neutral, advertising free image that says a lot – not an easy task. Today, I can see it was a success.”

Info: Of course, the “World of stamps” has plenty more to offer than just ice hockey designs. Interested? You can find the latest information and background here. The stamp designs can be downloaded here – with copyright «Swiss Post».