As Cornelia Heizmann can confirm, Swiss Post has always transported letters, newspapers and parcels by train. Together with a colleague, she heads up the Swiss Post department that deals with the question of “rail or road?” “I once heard that letters were transported by train on the Swiss Northern Railway between Zurich and Baden just one month after it opened in 1847,” she says with a smile.  Without doubt, the railways were important for postal traffic right from the start. But what is the situation today? “A large part of our internal transport is done by rail,” says Heizmann, referring to transport between sorting centers. Swiss Post’s focus in this regard is on the main axes of east-west and north-south.

The large letter and parcel sorting centers in Daillens and Eclépens, Härkingen, Zürich-Mülligen and Frauenfeld are located on the east-west rail axis.  At the sorting center loading terminals, containers loaded with parcels are raised onto rail wagons using cranes. Trains that only transport letters head directly into the letter centers, where Swiss Post employees load and unload them. Once loaded, the post trains take their parcels, newspapers and letters to distributions centers such as Landquart, Chur and Geneva. On the north-south axis, the trains serve distribution centers such as Basel, Cadenazzo and Visp. 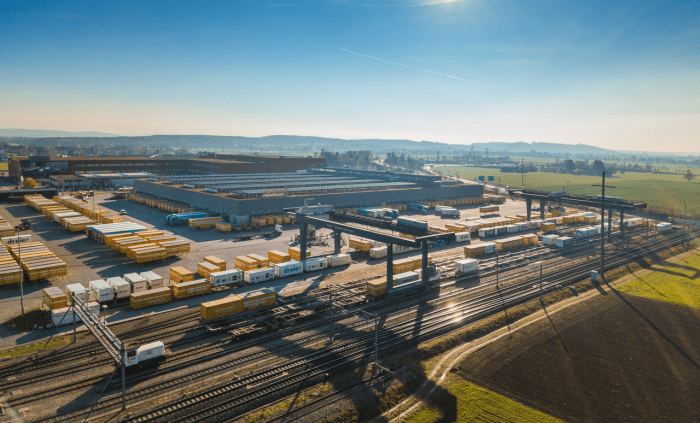 At Daillens, Härkingen, Frauenfeld and Cadenazzo, other transport companies can also use Swiss Post’s transshipment platforms to load their containers from trucks and onto trains. Find out more at swisspost.ch/combined-transport (Picture: Härkingen)

But what about Swiss Post’s new regional parcel centers such as Untervaz and Vétroz? Indeed, Swiss Post is investing massively in the construction of new parcel centers in order to rise to the challenge of ever-increasing parcel volumes. However, areas suitable for new parcel centers are hard to find and not always in the vicinity of the railway tracks. As Heizmann explains, “Roughly 50 percent of all letters and parcels currently travel at least some of their distance by train. By building the new regional parcel centers, Swiss Post will be able to sort much more mail directly within the relevant regions, helping to get parcels to doorsteps even faster in future. This means that, relatively speaking, we will transport a little bit less on the rail axes. But that will be balanced out by the overall increase in parcel volumes. Rail will remain the backbone of postal transport in the future and our first choice when choosing a mode of transport.”

Every day, SBB Cargo operates 45 parcel trains and 15 letter trains across Switzerland for Swiss Post − with a total of around 470 wagons. This takes place day and night, with around 60 percent of “yellow” post journeys happening between 7 p.m. and 7 a.m. Swiss Post must always order these journeys a year in advance. “For example, at the beginning of April 2022, we’ll order our trains for 2023 so that SBB Cargo can plan them into their annual timetable,” Heizmann explains. In railway-speak, this is called ordering train paths, and works similarly to airline slots in air travel. This means Swiss Post can’t simply change its number of train journeys as and when it sees fit. The post trains run according to a fixed timetable and are in sync with the rhythm of Swiss Post’s operations. Staff in the letter and parcel centers organize their work and the capacity of the sorting machines around the arrival of the trains. So, if a train comes in late, it can delay the delivery of many customers’ parcels and letters. 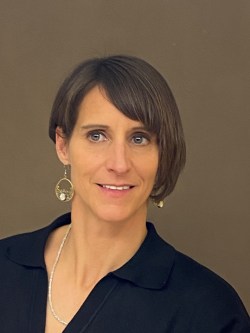 Woman power: Cornelia Heizmann heads a nine-person team responsible for planning road and rail transport in a job share with her colleague.

Road and rail complement one another

“Particularly for regions such as Valais, Ticino and Graubünden, we rely on trains running on time so that we can deliver A Mail letters, for example, within one day,” says Heizmann − rail being a faster option than trucks for these regions. However, in other regions − generally over shorter distances − road transport is the better option. For this reason, Swiss Post continuously checks which transport routes are better suited to road or rail. The choice is rail if it can serve households on time, if it makes sense both economically and environmentally, and if it’s logistically feasible. After all, online retail is booming and customers want to receive their products faster and faster after ordering them.

Tarmac or rail, the right choice of transport always depends on the number of parcels and letters, the time, the availability of train paths, the accessibility of the delivery destinations and costs.

Video: With its 31 parcel wagons this is the longest post train in Switzerland to date. Captured in Frauenfeld on Whit Monday 2020.