The longest postal round in Switzerland: the mail carrier who covers over 100 km a day

Mail carrier Anna Egger has her hands full: her vehicle is packed with parcels, letters and newspapers, all of which have to be delivered to the residents of the Safiental in Graubünden by midday. To make these deliveries, she has to travel over 100 kilometres. Anna’s route is the longest mail delivery round in Switzerland and winds over steep slopes in a region teeming with nature.

Early on a Monday morning at the Swiss Post distribution base in Schluein, Canton of Graubünden. About 45 employees are organizing the parcels, letters and newspapers for around 5,000 households and companies in and around the small town of Ilanz. Including mail carrier Anna Egger. She’s ready earlier than usual today. By 6.45 a.m., she’s already sorted all the letters and newspapers for her area – the Safiental – and loaded up her vehicle with the parcels. She’s ready to embark on the 103 kilometres of her postal delivery round, the longest in Switzerland.

“At Swiss Post, you learn to drive in reverse”

From the distribution base in Schluein, Anna first travels several kilometres through the villages of Valendas and Versam, above the Rhine’s roaring Ruinaulta gorge. Even during the 20-minute drive, it’s clear that she has no time to lose, working through all the gears. Because despite the breathtaking landscape between mountain peaks, gorges and beautiful meadows, the journey is not a leisurely trip into the countryside for Anna Egger. After all, Swiss Post has to be on time in the Safiental and deliver the daily newspapers to households by 12.30 p.m. at the latest – just as it does all over the country. Shortly after Versam, Anna’s actual delivery round begins: individual houses at the side of the road, followed by hamlets on the hillside, such as the small village of Tenna. The route continues steeply upwards, then directly into small driveways of homes along dirt roads – and back again in reverse over the jagged surface. “At Swiss Post, you really learn how to drive in reverse,” jokes Anna. 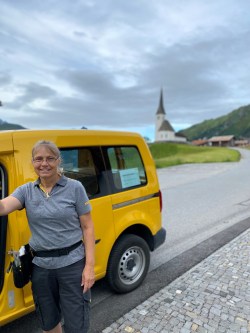 Anna Egger has been working as a mail carrier in the Safiental for seven years. 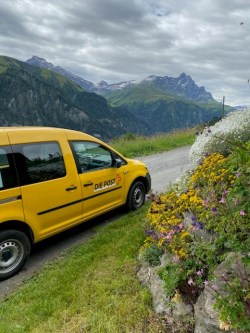 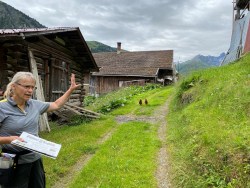 Anna Egger doing her rounds on foot: chickens and geese are also some of her daily companions.

Teamwork is the road to success 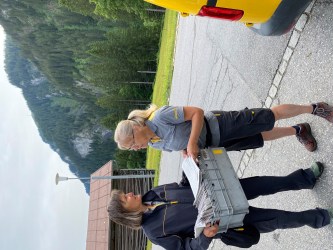 Are there any registered letters today? Handover and brief discussion between mail carriers Anna Egger (right) and Sonja Gartmann (left)

After driving about 40 kilometres and delivering mail to around the same number of addresses, the round heads on to Safien Platz. Here, Anna hands over some of the mail to her colleague, Sonja Gartmann. A short while before, the two colleagues had sent each other a signal by mobile phone. Three rings means: “Get ready, the handover is in 15 minutes.” Sonja now makes deliveries to the far side of the Safiental. In the meantime, Anna continues towards Zalön. “Teamwork is important,” they both agree. The mail carriers in the region are like a small family, helping each other out and taking time to listen to each other. Otherwise, it wouldn’t be possible for them to deliver the parcels, newspapers and letters on time. There are too many different villages with only one road leading in and back out again. This is most noticeable at Calörtsch Farm, which lies at 1,400 metres above sea level: to reach the farm, it’s a four-kilometre drive on a steep gravel road.

Sonja, a native of Glarus, has been working at Swiss Post ever since her apprenticeship and followed her husband to the Safiental years ago. She knows every nook and cranny of the area and is still amazed every day by the sheer beauty of her place of work: lush meadows, steep slopes, views of the Glaser Grat and Bruschg Horn mountains, the Rhine’s Rabiusa tributary crashing through the gorge. Teeming with nature, the Safiental in the Canton of Graubünden is without doubt one of the most beautiful regions in Switzerland. “If it were up to me, I’d prefer to deliver the mail on foot here,” chuckles the enthusiastic hiker. “But of course that wouldn’t be very efficient with today’s parcel volumes,” she adds.

Where the scythe replaces the lawnmower

Speaking of parcels: what do the residents of the Safiental have delivered to their homes? “Everything that people order elsewhere,” explains Anna. The only things she has never delivered to anyone here are air-conditioning units and lawnmowers. People in the Safiental live modestly. “Many here still cut their grass with a scythe,” Anna says, pointing from the car to a young man who’s busy using one at that very moment. It’s now 11.30 a.m., and Anna has just picked up all the return mail from her colleague Sonja, who’s collected it from households in the districts of Camana and Thalkirch. Many people here – young and old alike – make good use of Swiss Post’s home delivery service. Having the option of giving their letters and parcels to the mail carrier saves people in Safien’s outlying areas from having to go to their nearest Swiss Post branch. 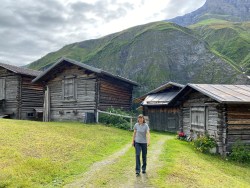 Swiss Post at work where others go on holiday. 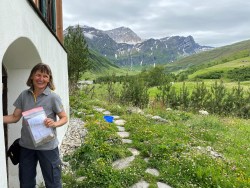 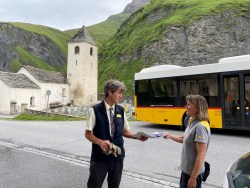 People know each other: the Postbus driver receives his mail directly from Sonja Gartmann. 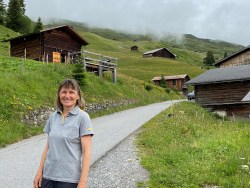 Even after many years in the Safiental, Glarus-born Sonja Gartmann is still amazed by her place of work among the most beautiful mountain scenery.

Fresh rhubarb to say thank you

It’s a nice day on this Monday at the beginning of July: light mist to start with, followed by alternating sun and clouds and a temperature of 20 degrees. “Ideal weather,” says Anna. “But it isn’t always like this,” she immediately adds. “Last winter, there was a lot of snow until well into spring. That’s when it’s worth wearing gaiters on your legs to get through the thick snow to the letter boxes.” Fitting snow chains is also an occasional part of the winter routine. And then there are avalanches, which are not uncommon in the Safiental. “Sometimes part of the Safien municipality isn’t accessible for a day or two,” says Anna. “But the people here know that and are always very understanding.” The people are the main reason why Anna, who used to work in the hospitality industry, loves this job so much. “The people are warm and want to have personal contact,” she says. Proof of this is that, today, a customer gave her a bunch of fresh rhubarb as a thank you. The small gestures vary. Of course, she’s also given mountain cheese from time to time, or some nice Graubünden dried sausage in winter, especially before Christmas.

The last houses in the villages of Gün and Arezen receive their deliveries at 12.30 p.m. today. Afterwards, Anna hurries back down into the valley. On the way, she collects the parcels at the Swiss Post branch in Versam, before driving back to the distribution base in Schluein. At 1.15 p.m., it’s time to unload and call it a day after driving more than 100 kilometres.