Parcels as far as the eye can see. Sorting machines working night and day at full steam. In terms of parcel volumes, the period from Black Friday on 27 November through to Christmas is the busiest time of the year. But this year is different in many ways. Online retail has increased sharply since the lockdown. This means Swiss Post is facing even greater challenges than in previous years. Swiss Post expects at least 20 percent more parcels than last year, and has put in place a whole range of measures to be able to process them.

Online retail saw a huge leap in demand during lockdown as people in Switzerland were called on to stay at home. As a result, Swiss Post experienced an equally large increase in parcel numbers. From March, parcel volumes grew day by day, and at times, they shot up. In April, Swiss Post broke a monthly record in its 170-year history by delivering an average of 850,000 parcels per day. These volumes really put Swiss Post’s logistics to the test. And, of course, they had fewer employees because many were in high-risk groups, were sick, had to care for children or simply due to social distancing at work. All of a sudden, staff had to load their vehicles alone instead of in pairs. And they were no longer able to lift small consignments or heavy parcels such as sofas or garden sheds in twos. Staff were only able to cope with such high numbers of parcels because everyone pulled together: letter centers started to sort smaller parcels to relieve the strain on parcel centers. Mail carriers not only delivered letters on their electric three-wheelers but also smaller parcels. Major customers presorted parcels in their warehouses. Parcel numbers may have dropped a little since then, but they’re still much higher than normal.

Coronavirus meets Singles’ Day and Cyber Week
That time has arrived – the most labour-intensive time of the year for mail carriers, staff in the sorting centers and in logistics, even without coronavirus: the traditional peak season in the run-up to Christmas. Parcel volumes have begun to increase again since the start of October. Swiss Post is currently recording around 24 percent more parcels than the previous year – about 15 percent of these are attributable to the coronavirus effect. It’s now coming up to the peak season for parcels with Black Friday and Christmas looming. Dieter Bambauer, Head of PostLogistics and Member of Executive Management at Swiss Post knows how much work needs to go on behind the scenes: “I’m proud that we can demonstrate year after year what outstanding performance we’re capable of.” Due to the large number of online orders since the coronavirus lockdown, Swiss Post is starting off with an additional volume of around 20 percent year-on-year. There’s no doubt about the outcome: “The corona effect and volumes during the festive season will lead to a major parcel record by the end of the year”, says Bambauer. “An all-time record”.

The current situation is very difficult to forecast but the pandemic has Switzerland firmly in its grip again. Some cantons are back in lockdown, shops are closed and people are buying more online again. Additional cantons may join them – including over the coming weeks – which will then heavily impact parcel volumes. The weather is another influencing factor as rainy weekends lead to more parcels. The Swiss are spending their time shopping online. 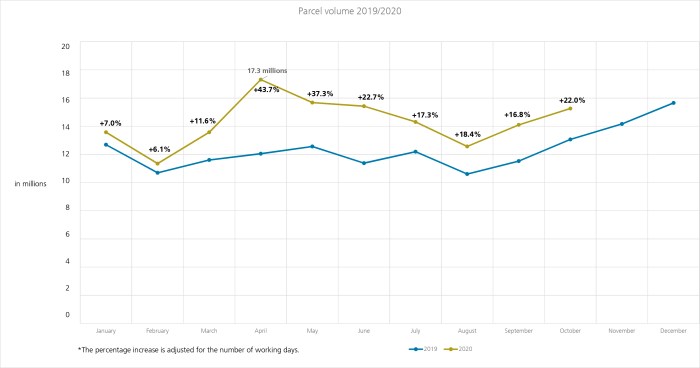 Planning work has been underway since summer
The situation remains unpredictable. Swiss Post has put in place a whole range of measures to cope with parcel volumes and make sure they can continue to be delivered to people’s homes on time. The company has learned from the sharp increase in parcel volumes during lockdown and reactivated processes and measures that proved successful during the spring.