A world first in sorting: 19,000 small parcels per hour

Following the commissioning of four new regional parcel centers, Swiss Post has now reached a new milestone in the processing of small parcels and small goods consignments: in the Zurich-Mülligen letter center, preparations are being made to commission a new, ultra-modern MixMail system, which can process small goods consignments from abroad and domestic small parcels entirely automatically. The new system has twice the sorting capacity of previous systems and can process 19,000 consignments per hour. How does this world-leading logistics innovation work and what added value does it generate?

Many people know that the Zurich-Mülligen letter center is Switzerland’s largest sorting center, and processes 4.5 million letters every day as well as all international correspondence. However, only a few of them know that numerous technicians have spent months working behind the scenes to assemble the sections of a giant new two-storey sorting system bit by bit and according to a tight schedule. It’s an innovative MixMail system with cutting-edge technology.

In the future, the system will sort small goods consignments from abroad as well as domestic small parcels entirely automatically in Zurich-Mülligen. The work will continue to be carried out under the watchful eyes of employees, who will intervene where necessary with great dedication. “The system is the first of its kind worldwide and represents uncharted territory for everyone involved,” explains project manager Patrick Conte. Swiss Post expects the new system to be fully operational by summer 2021.

The new system offers advantages for everyone
While letter volumes have fallen steadily in recent years, the volume of small goods consignments and small parcels – particularly international consignments – has been constantly increasing. The boom in online retail has seen Swiss Post handling an ever-larger number of parcels. Swiss Post needs to prepare for the future and is investing not only in parcel centers but also around 70 million francs in this ultra-modern and innovative system in the Zurich-Mülligen letter center.

Ueli Hurni, Head of PostMail and Member of Executive Management, believes the new system is the solution to the soaring volumes of small goods consignments: “It will enable us to double our previous small goods consignment sorting capacity and also sort small domestic parcels. This means we’ll be able to ensure system’s capacity is utilized optimally, relieving pressure on the parcel centers in the process.” According to Ueli Hurni, this will be particularly important during times when parcel volumes peak, for example before Christmas or now, during coronavirus.

Until now, the mostly soft and shapeless small consignments have been sorted by hand. Last year, there were around 30 million such items. The system was commissioned at exactly the right time: in the next few years, Swiss Post anticipates further increases in the volumes of small goods consignments and small parcels.

Customers will also benefit from small goods consignments and smaller parcels being processed more quickly, more reliably and with a higher level of quality. What’s more, it’s entirely conceivable that additional recipient services can be provided in the medium term thanks to the system.

So how does the system actually work?
At the moment, the letter center staff are undergoing training in operating the new system. On the first floor, the system measures the volume of the incoming small goods and scans the addresses. The larger consignments on the conveyor belt turn to the side automatically and fall into one of the 157 side terminals for consignments in bulk containers. Up to this point, everything is fully automatic.

Ernst Huber, an employee in the letter center, is delighted: “We urgently needed the new system because it was becoming almost impossible to handle the large volumes by hand”.

Amalgamating the parcel and letter units is a key component of the new “Swiss Post of tomorrow” strategy.
The trend in recent years – more parcels and fewer letters – has intensified considerably with the coronavirus pandemic. To make the best possible use of the existing resources and to prepare for the future, Swiss Post will amalgamate the PostMail and PostLogistics units from 2021. The units already work together closely in a number of areas. Since the beginning of the pandemic, for example, the staff in the letter centers have also sorted small parcels – handling up to 150,000 items on peak days. “This new system in the letter center is a perfect example of how PostMail and PostLogistics are already applying interdisciplinary thinking and working in a really agile manner,” says Ueli Hurni.

Due to their different dimensions, their packaging and the large volume, small goods consignments are something of a challenge when it comes to sorting. They weigh up to 2 kilograms and are generally comparable to thicker letters than those usually seen in Switzerland. 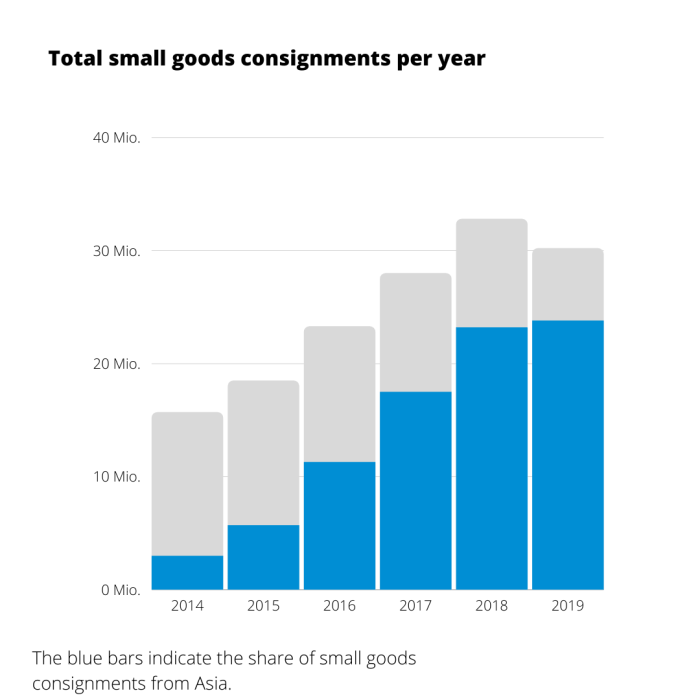 Automation – nothing new in letter processing:

Since 2008, letter processing has been largely automated at Swiss Post. With about 3,000 employees, the three letter centers in Zurich-Mülligen, Härkingen and Eclépens form the core of letter processing activity in Switzerland. Modern automation solutions are used for incoming goods, consignment preparation, high-bay storage, sorting, picking and outgoing goods. The link between all these stages of the letter processing procedure is the highly automated conveyor technology. And for a number of years, it’s been possible to sort consignments automatically direct into the sequence of private letter boxes.